Exhibiting Early Modern Fashion: ‘New for Now’ at the Rijksmuseum

For a long time now the Rijksmuseum has ranked highly in my estimation. Not only do they have a fairly amazing collection of objects and art, they’ve also digitised and publicly catalogued a significant proportion of that collection. Plus through their Rijksstudio function you can build up your own collections of objects (essentially a way of saving huge amounts of time in allowing you to quickly find things again), and, unlike many museums, they’ll let you download images free of charge to be used at will. Not forgetting, of course, their amazing promotional video for the museum’s recent relaunch based on Rembrandt’s ‘Night Watch’ (a painting which can also be purchased in Playmobil form, to my great delight).

Last week I had my first chance to visit the reopened museum as part of a short research trip to Amsterdam. This only served to make me love the museum even more. The redesign looks great, the way the collections have been arranged really works, and the label writing is highly impressive. And then there’s the fact that they very generously let me behind the scenes to study their collection of early modern gloves, providing key research for my thesis.

The main reason for my trip to Amsterdam was to visit the Rijksmuseum’s current exhibition, New for Now, which they describe as being about the ‘origin of fashion magazines’. Having relatively recently acquired many costume and fashion plates, they’ve placed a significant number of them on display in the exhibition, as well as making their wider collection of over 8,000 items available digitally. The exhibition looks at fashion reporting from the mid-sixteenth century to the 1930s, ending at the point at which photography began to take over from illustration as the primary means of visually disseminating fashion in print. For according to New for Now, whereas now we have the internet to learn about fashion, previously ‘Fashion was disseminated on paper: initially via loose, hand-coloured prints, and later via fashion magazines’.

The exhibition has been organised in three rooms, with each covering a different chronological period and with correspondingly coloured walls. Indeed, it’s an attractively designed exhibition – although the use of walls over cases and relatively small number of visitors means there’s a lot of empty floor space – with a slightly quirkier aesthetic than the gloss of many fashion exhibitions, and a good use of contemporary artists and illustrators, as in the video for the exhibition and a couple of installations in the space itself.

The first room deals with the eighteenth century, described by New for Now as seeing the beginning of fashion magazines with Cabinet des Modes in 1785. The second room looks at the nineteenth and twentieth centuries, when there was an ‘explosion’ in the medium, with an increasing range of titles available and markets catered for, and then a move to a more artistic vision and depiction of fashion. The third room looks back to the sixteenth and seventeenth centuries, acknowledging that long before the existence of fashion magazines, Europeans had been interested in the clothing of others, shown via the media of costume books and series of fashion prints.

The history New for Now charts though is not one of a simple and easy development and growth. Instead, it shows a media with frequent disruptions and gaps in service, which took a long time to change, despite claiming that a market and hunger for fashion information and images existed, and in some ways proving that it existed through the very existence of multiple fashion plates. This raises the question of why there wasn’t a smoother development or earlier adoption of fashion magazines, an issue which my own research into fashion news in the sixteenth and seventeenth centuries (i.e. before the rise of “fashion journalism” per se) is grappling with; was the market lacking or the medium?

For the exhibition falls a little short when it comes to contextualisation of the images presented. There is little mention of the role of gender, despite the overwhelming number of images of female fashion, particularly in the nineteenth and twentieth centuries. There is also no real discussion of the images’ influence or impact; it is merely accepted that they circulated and had an effect on what people wore, without a true consideration of numbers printed or how widely they were distributed, nor of how a print could work to effectively enable trends to be disseminated; is a stylised 2D translation of a 3D garment really the best way of transmitting fashion information, for example? 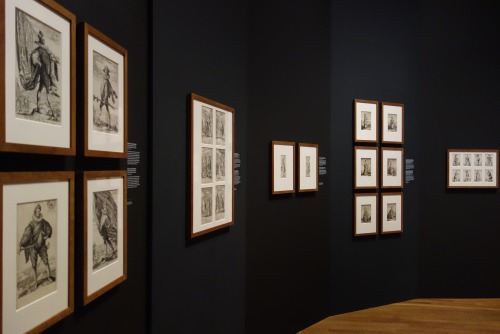 Similarly, it feels like assumptions have been made as to the veracity of the images under consideration. Whilst most fashion plates did depict actual garments and fashions, and the museum’s captions often identify and describe the fashions shown in the prints, there is no real acknowledgement of the fact that for the early modern period artistic licence, images being out of date, and consumers being unwilling to trust printed news could be a problem.

Fashion is also taken in the exhibition as a very serious and positive subject, despite the fact that much of its publicity throughout its history has been incredibly negative, or at least wary of the constant changes in fashion and the fact that ‘Fashion is always NEW … New for Now, and almost instantly becomes passé’. Although none of the images on display are obviously satirical, many printed depictions of fashion were, poking fun or raising grave moral concerns over either the notion of fashion itself or the nature of specific garments. In some ways such depictions of dress could still be seen as a form of fashion reporting, only with a considerable bias. But this raises the question of what constitutes fashion imagery or a fashion plate. The exhibition doesn’t really define its terms as such, but it does seem to take a potentially broad view of the subject, showing that a number of publications encompassed changes in interior design and furnishings as well as in clothing, and displaying a couple of images which appear to be more scenes of a group of fashionable people promenading in fashionable situations, such as in pleasure gardens or at Café Frescati, than what we might traditionally think of as “fashion plates”. 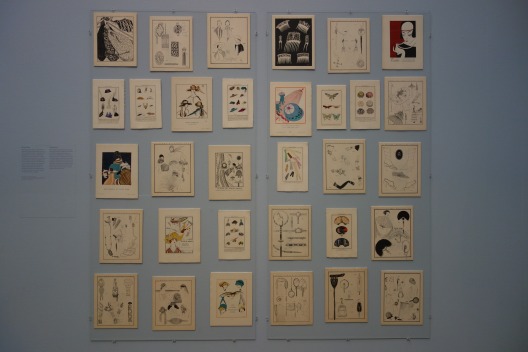 For there is clearly variety in the genre, which the nature of the exhibition, and its design in generally showing images in groups (either all on one theme or coming from one publication), is able to highlight. By bringing together a range of images and placing them alongside one another, similarities and differences between different illustrators and publications, as well as over time, are shown. Small points of interest, such as the preponderance of illustrations of the back of clothing in early modern Europe, come to the fore, as does the wider idea that the prints are revelatory as to the fashions and predominant aesthetic in illustrative techniques and style of each different period, not just dress fashions, with the simple, colourful, slightly abstract style of the 1920s being very different to the fine, naturalistic engravings of the early seventeenth century, yet both being completely “in period”. The exhibition also shows the allure of the medium of print itself, with the material object of the magazine or illustration being not just a means of learning about fashions, but a coveted and attractive object in its own right, highlighted in the introductory gallery with a display of the decorative covers used from the late nineteenth century to persuade people to buy fashion magazines once they moved away from being subscription-only and into shops.

New for Now raised a lot of questions for me, often in terms of whether certain features found in prints from the eighteenth century onwards appeared earlier at all, and if not why not. While it may not have provided many answers on why developments were happening at all or in a particular manner, it was a very useful introduction to the history of fashion imagery and reporting, an issue which I am currently embedded in in my own research. Whilst fashion plates are possibly not the most exciting or crowd-drawing subject for an exhibition (particularly in comparison to fashion objects themselves), New for Now shows the potential for further investigation to be done into the medium, in both exhibition and article/book formats, as well as the richness of both the topic and base source material.